At eight storeys Highpoint I isn’t dramatically higher than the common five storey housing blocks being built at the time (Queen Alexandra Mansions is nine storeys). Highpoint I is significant for its international style associations although too much made of the visual aspects of modern architecture. The lobby, on the other hand, is a major invention. Sometimes referred to as a social condenser it is, at least, a luxurious common living room. It is a tour de force of spatial sequences employing changes of level, section height, columns as screens arranged around a picturesque layout. It is a rare example in that it confronts the problem of collective arrival into a building comprising many homes (60 flats). The flats are reached via two lift and stair cores at either end.

John Allen describes the route into the building in good detail:

“The most natural starting point for a detailed investigation of Highpoint, its entrance and ground floor also introduces the most resonant element of the scheme – the promenade architecturale – the formalised route through changing spaces that had been developed by Le Corbusier from a 19th-century Romantic provenance and definitively expressed at the Villa Savoie five years earlier. There the sequence conjoined the several experiences of vehicular arrival, covered entry, ramped ascent and rooftop egress in a controlled ceremony of disengagement with the machine and re-engagement with nature. At Highpoint One an equivalent procession begins with the similar, though concave, curved approach of the driveway, which passes, as at Poissy, between the building envelope and the perimeter column grid and is reflected in the sculpted canopy fascia. Extrapolating the splayed building line from the north, the oblique entrance projects a diagonal route by-passing the east core and leading to a semicircular lounge which returns to grid on centre axis. This elegantly resolves the problem of equalising the status of the two stairtowers, whilst subtly differentiating visitors’ and residents’ zones in the extensive foyer. The change in level (four steps) and floor finish (terrazzo to carpet) signals that on reaching the landing one is back under the footprint of the block above. The landing itself is provided with clerestory lighting and spacious headroom by raising the entire central spine of accommodation half a storey…”

The entry into the flats is off an oval core containing the stair and lift. The front doors of three flats face each other with the forth separated by a half level at the opposite end of the oval core. Though the cores are fairly straight-forward Lubetkin brought light into them through utility spaces by employing obscure glazing. This provides a subtle ‘bridging’ effect into the four wings.

The automobile is integrated into the entry sequence with a drop off area leading directly into the lobby. Like the Isokon building, automobiles are informally gathered at the front. 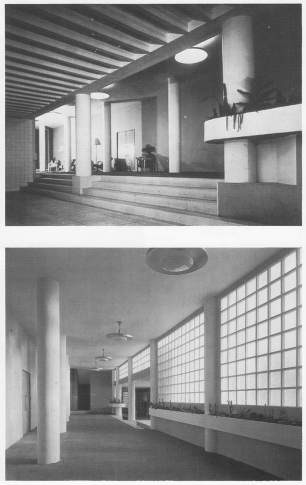 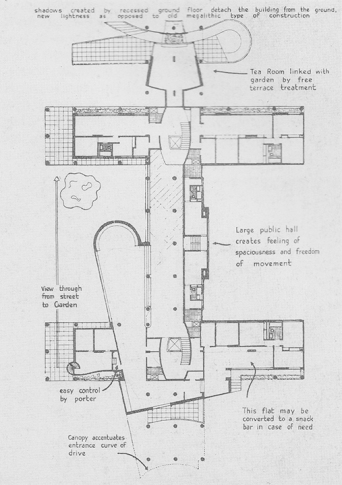 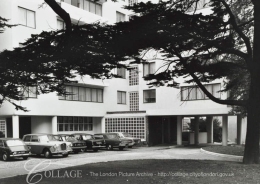 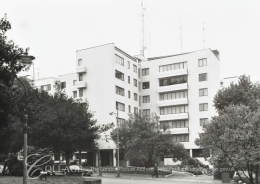 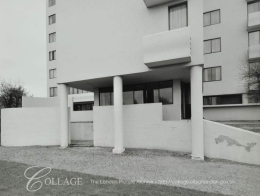 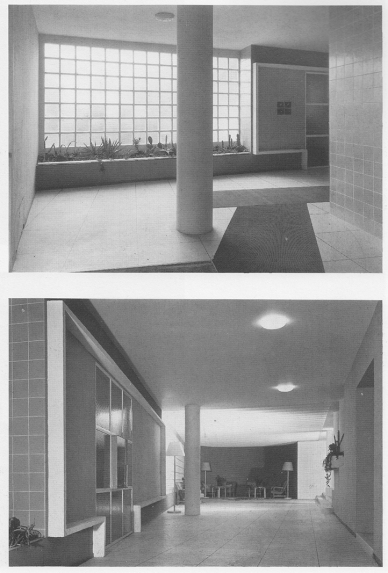 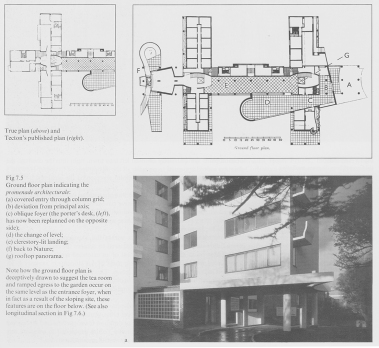 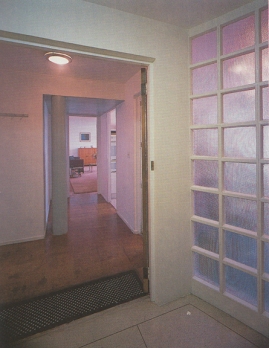