There is precious little information about this innovative project. It was likely the first concrete dwelling in Britain and certainly the first intended for mass production. The entry sequence combined the Victorian exposed staircase with a gallery running across the façade.  It’s a unique combination and the handling of the gallery and façade creates a distinct sense of hovering or being suspended in front of the façade. The gallery isn’t really integrated into the façade but treated like overly-elaborated entablatures. It makes for a continuous and strong connection with the street. The stairs appear to curve at the tops. There isn’t evidence in the few photographs of the galleries being used for anything other than access. There were, however, balconies provided at the back that could have been used for open air activities. 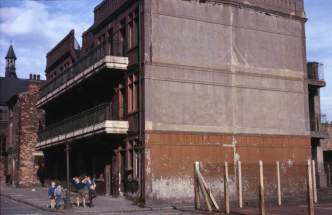 There is no site information available for this project.