This is a perimeter block tenement building with galleries on the interior. There is a main archway leading into the interior court as well as open air stairways leading up to the galleries. The access points were originally open to the street allowing for a fluid link between street and courtyard; they are now all gated. It is notable that there is no level change between the footpath, access and courtyard, suggesting a continuous space. Of the three early types of this form (Streatham Street, Gatliff Building, Victoria Square Dwellings) the courtyard seems to have been intended as a collective space rather than act as an overly-large light well. In addition it is the only example which allowed access to the court from street to passers-by.

Though the architectural treatment of the courtyard is fairly regularised it is livelier and more informal that the exterior elevations. The black & white image shows that the galleries were used to hang laundry suggestion some possible socialisation in these spaces. More recently the inhabitation of the galleries seems restricted to flower boxes dotted here and there although there are a few chairs scattered about. There is a tended green in the courtyard with a couple of benches used by residents (the building is now retirement housing). A lift has been added in one corner of the courtyard. 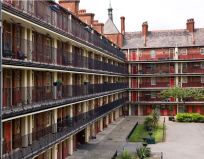 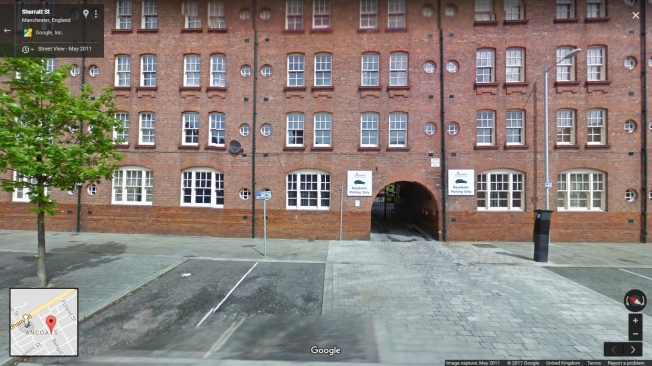 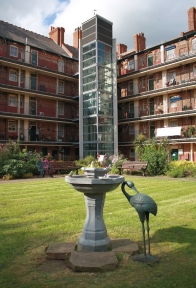 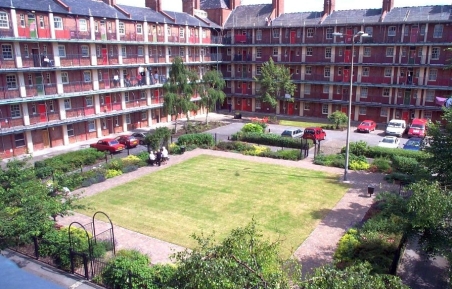 Back to 4. Streatham Street Model Dwellings